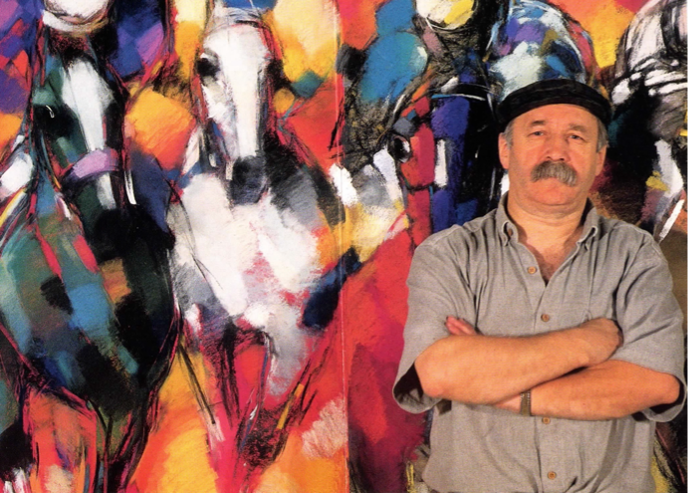 While shopping at Żabka, I noticed that a young saleswoman working there, each time wearing a different, fancy makeup and hairstyle. I offered her to pose for a portrait for me. One session turned into several. I painted a series of “awesome” portraits. Her creativity stimulates my creativity. Rarely is there such a creative synergy between an artist and a model.

Valentina is a very ambitious girl. She comes from Ukraine. For several years she has been working and studying in Poland

Artist, painter, graphic artist, performer, author of installations and spatial compositions. A horse lover and expert, honored as the Official Artist of the 124 Kentucky Derby in the United States.

Studies at the Academy of Fine Arts in Warsaw. Graduated with honors in painting and graphics in 1965. He practices painting, sculpture and applied graphics. He has had over 40 individual exhibitions in Poland and abroad, including in the United States (New York, Washington, Atlanta, Chicago, Philadelphia), Germany, Sweden, Finland, France and Australia. He has received 25 awards for creativity in the field of poster and painting, including 8 in competitions organized by the Polish Olympic Committee. Bogusław Lustyk’s work was exhibited at the Olympic Games in Barcelona, ​​Atlanta and London. In 2012, he carried out a unique project “The Painted Chronicle of the Olympics” in London under the honorary patronage of the Minister of Culture and National Heritage. Since 2002, he has been cooperating with the Grand Theater of the National Opera in Warsaw, which resulted in two large exhibitions. On the occasion of the 150th anniversary of the birth of Fryderyk Chopin, he prepared a series of paintings entitled “Painting Music”, which was exhibited at the Kordegarda Gallery and at the International Festival in Międzyzdroje (during these exhibitions, the paintings were interpreted musically by Waldemar Malicki), as well as at exhibitions in Chicago and Saratoga Springs (during these exhibitions, the paintings were an inspiration for musical improvisation for American jazz musicians). In cooperation with the Grand Theater, he designed a promotional setting for the 8th International Vocal Competition named Tadeusz Moniuszko.

For me, blank canvas is a kind of battlefield where I stumble upon my limitations, complexes and disbelief in art. Sometimes I win, but more often I get beaten. I do not give up because I believe that the most important pictures are still ahead of me. I would like the pictures to tell about my fascinations, my dilemmas, euphoria and doubts. By combining such distant themes as abstract music and expressive horses in my art, I try to show what unites them, not what divides them.

Looking for works to your collection?

Write us. We prepare the proposal for you and answer your all questions.