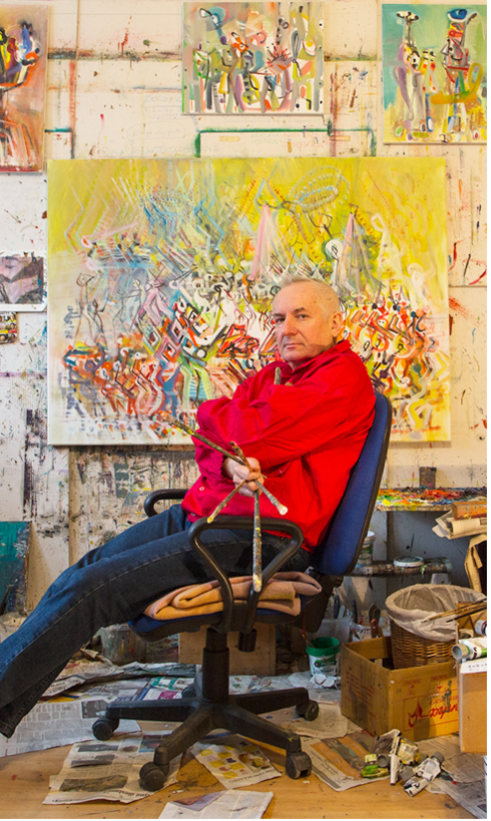 Janusz Antoszczyk is an extraordinary figure. As befits a professor, he creates and teaches how to create. Sets directions. His paintings strike with expressiveness, symbolism and unusual colors. Many of them show a sublime caricature, which may be perceived as an artistic criticism or pastiche.

A graduate of the Academy of Fine Arts – Władysław Strzemiński in Łódź. Since 1992, an academic teacher at his home university. In the years 2007-2012 he was the head of the Department of Visual Communication at the Faculty of Design and Interior Architecture. In 2013, he obtained the title of full professor. From 2016, head of the Painting Studio at the Faculty of Fine Arts at the Academy of Fine Arts in Łódź. Author of 30 individual painting exhibitions, as well as participation in about 70 collective exhibitions in Poland and abroad.

Thus, Antoszczyk seems to create portraits that do not portray anyone, and genre scenes are often deprived of their proper expressive context, mixing socio-political realities with fanciful ones. Sometimes this painting is also a recitative, parasitic – as postmodernists said – the procedure of reducing masterpieces to a funny abstraction. “Lady with an Ermine” turns into a painter’s pun, and on the autopsy table the painter has arranged the professor Tulp himself, although we cannot be sure of this. On the other hand, Nebuchadnezzar – the Babylonian cruel – lost his terrible face and the fear of moral decay. Antoszczyk, moving away like an echo from the prototypes of Leonard daVinci, Rembrandt or Blake. likes to reverse the classic formula; cognito clara maior est, quam obscura (Latin “light is bigger than dark”). He eagerly reaches for deformation, grotesque, funny colors and nonchalant impasto, a very sweeping gesture, consistently saturating painting with visual humor and … pink. “

Looking for works to your collection?

Write us. We prepare the proposal for you and answer your each question.