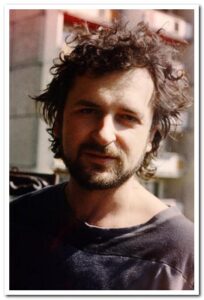 An artist who divided his time between the moments spent at the easel and wandering around distant countries. He was a particularly sensitive portraitist. In his work, you will find inspirations from the eastern ornament and tasteful colors.

Krzysztof Wojtarowicz studied at the Painting Department of the Academy of Fine Arts in Warsaw, obtaining a diploma in 1981 in the studio of prof. Stefan Gierowski. After graduation, he worked in television set design. During the martial law period, he did not exhibit his works. In 1984 he founded the Art Gallery at the International Airport in Warsaw. The following year he co-founded the TWM Gallery in Geretsried, Germany.

He organized many exhibitions in collaboration with artists from the Netherlands, Italy and France. In 1994, together with Bogdan Stodulny, he founded the Galeria Atelier of the PTTK Warszawa – Śródmieście Branch. In 1996-1998 he worked at the National Museum in Warsaw. He was the author of the artistic arrangements of many exhibitions, incl. “Warsaw and her museum”, “The end of the century”, “The art of Polish modernism 1890 – 1914”, recognized as the best exhibition of 1996, as well as “Paris and Polish artists around E..Bourdell 1890-1918”, “The mysterious queen Hatshepsut” .

Krzysztof Wojtarowicz was an outstanding painter who was able to reflect the anxiety and haste of our times in his works. We will not see his new paintings, we will not meet at the next vernissage, we will run out of disputes and discussions about art. However, it will remain in our memory forever, his paintings will also remain as a testimony of honesty in practicing a difficult, artistic profession, struggling with adversities. Krzysztof argued that the creative instinct exceeds other human instincts. He remained faithful to this truth to the end.

Looking for works to your collection

Write us. We prepare the proposal for you and answer all your questions.