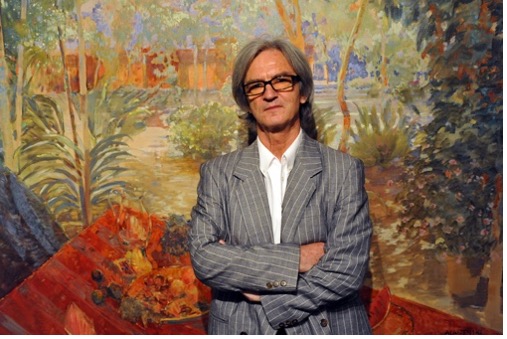 “Marek Ałaszewski alone can replace all these age-old treatments combining music and image. Institute, Department, Intercollegiate Faculty – plays as he paints and paints with notes. The minor tones are grays and blues of landscapes from the middle of the world, and the major tones are pulsating with the sun. Sometimes a photorealistic image appears. Locomotives are fascinating all boys, regardless of age. “

He is a graduate of the Faculty of Painting at the Academy of Fine Arts in Warsaw. He started his musical activity during his studies – as a vocalist and guitarist in the band Pessymiści i Bardowie.  In 1969 he founded a musical, vocal and instrumental group, Klan. He was a musician, composer and songwriter in it.

After the band was liquidated in 1971, he focused on art, although he did not part with music. The clan was reactivated in 1991. Until May 2016 he performed and was active as a composer and painter.

Since then, a serious illness has prevented him from doing anything.

“He is not a revolutionist, but a continuator of the painting of great effort and long duration. One glance at his paintings is enough to feel the presence of tradition in them, especially Polish symbolism. Mark is not interested in experiments and colorful fireworks, but in muted scales, broken by grayish blues.” and roses, landscapes shining with light, coarse, thoroughly Polish. “

Looking for works to your collection

Write us. We prepare the proposal for you and answer your each question.